As you know Java, R, Rust, Python, Kotlin, etc are the programming languages that the top tech companies prefer. Even Tiobe says so.  As a developer you know these languages can land you a six-figure salary in the top companies that set’s your career zooming. However, if you want to work in a top bank, these are not wanted! Banks don’t want Java, R, Rust, or Kotlin programmers. In fact, the top banks prefer programmers who can work with the most disliked programming languages like Delphi and VBA.

After a report is displayed by Stack Overflow shows that the most disliked languages, by a fairly large margin, are Perl, Delphi, and VBA. They’re followed by PHP, Objective-C, Coffeescript, and Ruby. On our team, we’re certainly happy to see that R is the least disliked programming language, relative to the number of people who liked it.

If you’ve read some of our other posts about the growing and shrinking programming languages, you might notice that the least disliked tags tend to be fast-growing ones. R, Python, Typescript, Go, and Rust are all fast-growing in terms of Stack Overflow activity (we’ve specifically explored Python and R before) and all are among the least polarizing languages. Similarly, many of the shrinking tags, such as Perl, Objective-C, and Ruby, are ones we’ve previously observed to be among the fastest-shrinking tags on the site. 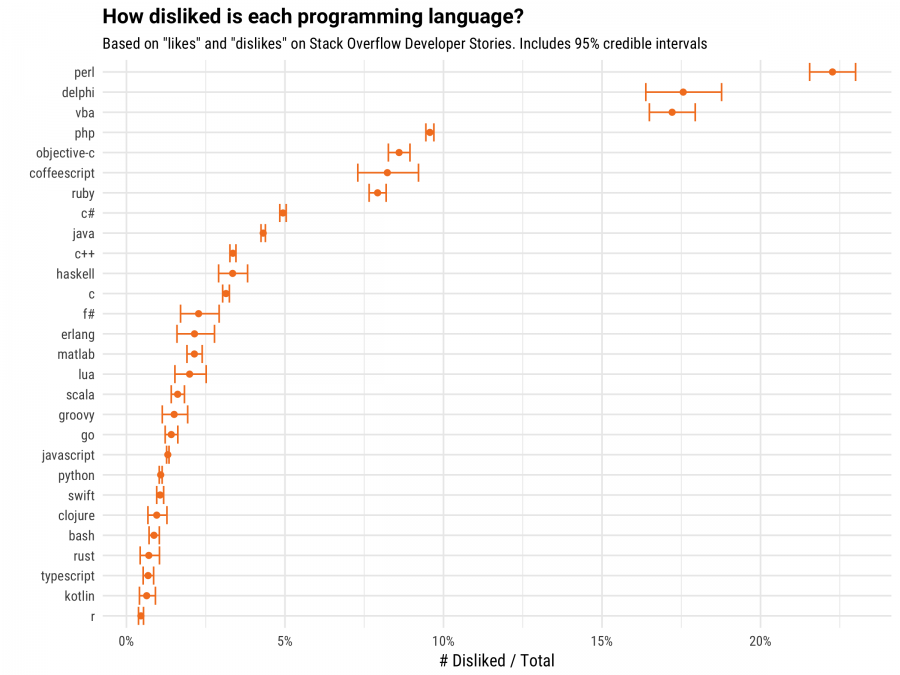 According to news.efinancialcareers.com, At a ‘representative sample’ of top U.S. banks, there are currently hardly any Kotlin jobs advertised, no Julia jobs (no surprise), and barely any Typescript jobs. By comparison, VBA jobs – which Stack Overflow ranks as the ‘most dreaded’ are fairly plentiful.

The shortage of jobs using Rust, Typescript, and Kotlin in banks comes despite the fact that 26% of Stack Overflow’s respondents said they use Typescript at work, 8% said they use Kotlin, 6% said they use Rust. By comparison, in the world at large, just 6% of people use the dreaded VBA – even though it’s still prevalent in big banks.

I’m more of a statistician than a programmer, but I code in R, Python, Julia, and a couple of others regularly and without much difficulty. Anything I don’t know how to do, I can figure out. Recently, though, I’ve had to start learning VBA for a job through editing fairly simple macros, and it feels almost entirely different. I’m moving at a snail’s pace because even things that I’d find straightforward in other languages seem to require way more work in VBA (with no apparent efficiency gain). I’ve never had this much difficulty learning any other language; it seems almost completely unintuitive to me.

What do you think about banks not using the most loved programming languages by developers? what is your take on VBA and the most loved languages? Do mention it in the comment section below. For more news on tech and cybersecurity subscribe to our newsletter from here