Honda Motor Company, the top Japanese public multinational corporation known as a manufacturer of automobiles, motorcycles, and power equipment has had to shut down its operations for the past two days. According to Jalopnik, the company was hit by a ransomware attack on June 7 affecting a loss of connectivity to its overall business operation. Honda IT team is looking into the matter but haven’t seen any progress to recover its access to the operations.

Honda’s car inspection system used to check defects before shipping and registering car information, wasn’t able to access computers at its plants. The company found the system issues in the early hours of Monday and informed it’s IT team. After the inspection, it was found that no Honda employee or IT person was able to access the Honda network.

On Sunday, June 7, Honda experienced a disruption in its computer network that has caused a loss of connectivity, thus impacting our business operations. Our information technology team is working quickly to assess the situation.

The researchers and cyber experts are continuously investigating the attack but haven’t found any relevant solution or information as to what kind of ransomware was used and how the attackers gained access over the Honda network.

Meanwhile, The Honda employees were informed about the attack as soon as they found it was risky to access the network, the employees were thereby advised not to log in to the Honda Network at work. 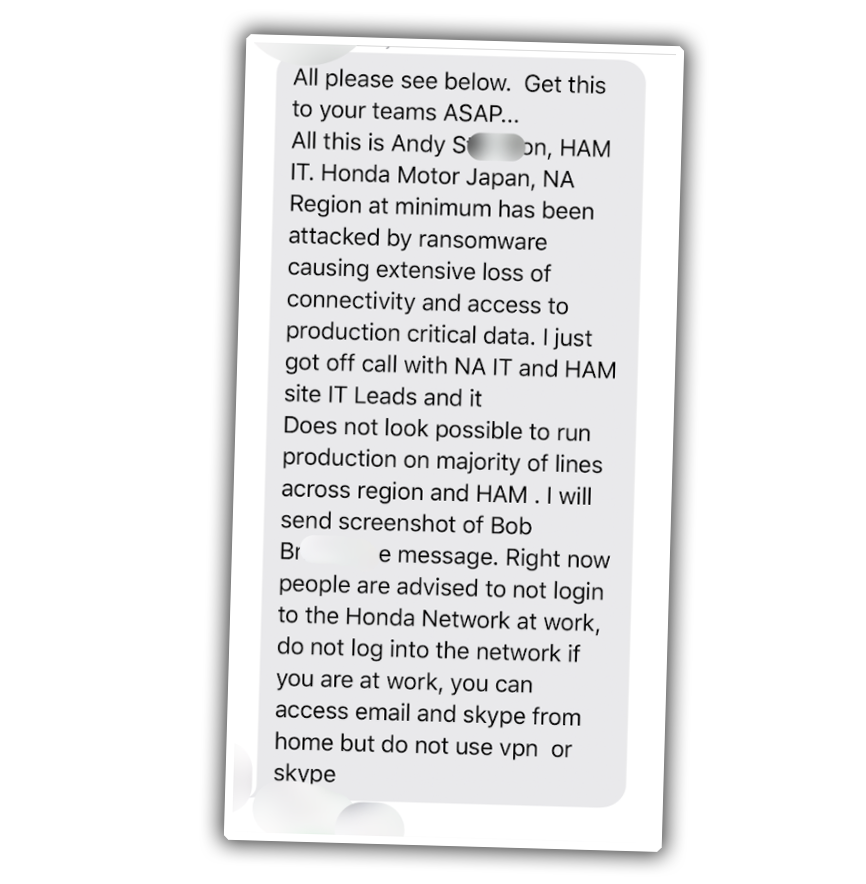 The ransomware that is the culprit is claimed to be Ekans Ransomware or SNAKE spelled backward. Ekans is also a Pokemon character. The Ekans ransomware is known to target industrial control systems like those at Honda motors.

The disruption comes as manufacturers have shut offices and plants and let staff work from home due to the coronavirus pandemic. Japanese carmakers have slowly started to ramp up production after the country lifted the state of emergency. Honda resumed operation in the U.S. from May 11 and plans to reopen its U.K. plant this week.

Well, Honda has not yet found any solution to the attack, and the IT team also has not yet made it possible to access the Honda network. Hacking attacks have been known to disrupt Japanese operations and of late we have noticed that hackers are increasingly targeting Japanese companies like Mitsubishi Electric, NTT and NTT Communications during the past month. On a side note, the top Japanese cryptocurrency exchange, Coincheck was also hacked last week.

Readers may note that a hacking attack in 2016 on the Japanese multinational, Sony left its computer network paralyzed for more than a month.

Stay tuned at Android Rookies for further updates on the matter. To stay updated on tech and cybersecurity news you can also subscribe to our newsletter from here