Did Google France’s website accidentally reveal the launch date of the Pixel 4a 5G and Pixel 5?

As you all know technology giant Google launched its Pixel 4a 4G Android Smartphone on 3rd August. Along with the launch of Pixel 4a the company also teased the launch of Pixel 5 and Pixel 4a 5G. it seems Google France might have accidentally revealed the official launch date of its new smartphones. The date has since been removed from the post, but not before screenshots were taken.

The company had lately launched the Pixel 4a and said that it will launch the 5G model of the gadget and the flagship Pixel 5. The $349 (roughly Rs. 26,300) Pixel 4a is predicted to reach in October in India, however, the Pixel 4a 5G and Pixel 5 will not be launching within the nation.

At the time of the launch, Google did not reveal when its 5G-enabled phones will be launched, but thanks to Google France. As spotted by 9to5Google, the official blog post announcing the Pixel 4a had a mention of the pre-order dates for the Pixel 4a 5G and Pixel 5, with both devices set to be up for pre-order from October 8. Which was later removed by the company. 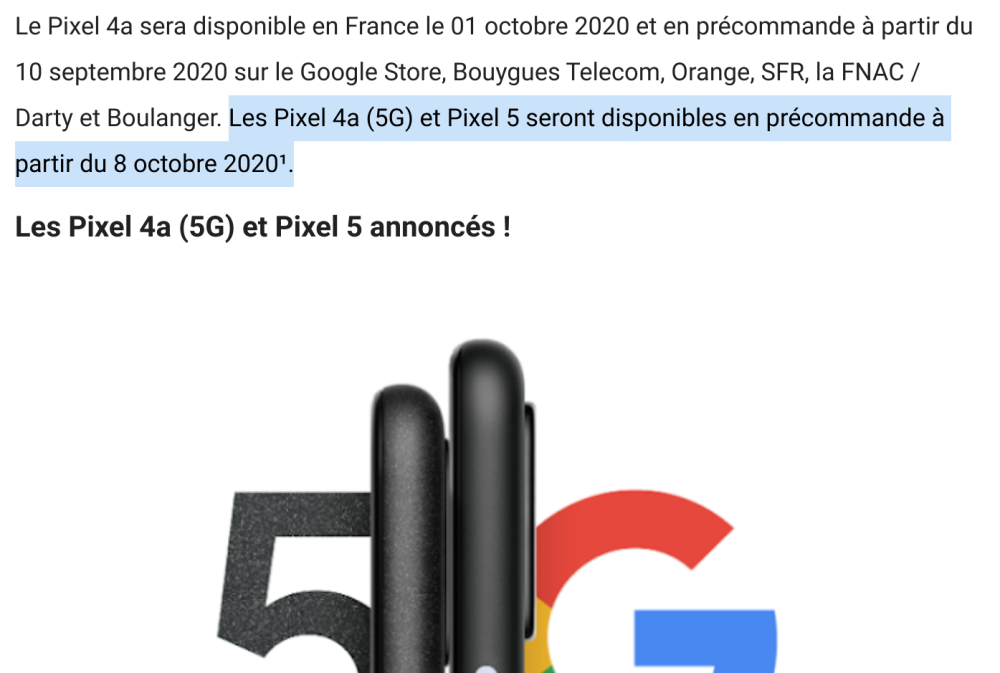 The new Pixel 4a 5G and Pixel 5 are expected to run on Qualcomm’s Snapdragon 765G chipset. There have been multiple reports asserting the fact that Google will not use a flagship chipset for the Pixel 5.

The Pixel 4a (5G) and Pixel 5 will be available soon in Germany, Australia, Canada, United States, France, Ireland, Japan, United Kingdom and Taiwan. In the coming months, we’ll be revealing more details about these devices and our vision for 5G. In the meantime, do not hesitate to register for all the information in preview.